Since being called to the Bar I have been able to use my knowledge from private practice as a solicitor in relation to accounts, general and mortgage frauds. My knowledge of solicitors practices has resulted in my being instructed to represent a number of solicitors, well known in the Merseyside and immediate areas, who had mis-appropriated funds usually from their client accounts. I have defended in numerous general and mortgage frauds of varying complexities.
OPERATION AWARE 2008/9 Defence. Leading Junior
Norwich Crown Court. The Crowns case was that through a number of companies set up in the Lincoln area the 8 defendants and others had defrauded the public purse of in excess of £1 million PAYE and £900K VAT. The first two defendants had previously been convicted of a similar fraud involving another company, Headland. The system involved real and fictitious farm labourers who were employed by a number of real and again fictitious companies. The cross payments between the companies at face value legitimised the transactions such that the Vat. and P.a.y.e. payments to the treasury were substantially reduced. Needless to say the actual transactions over the period were in excess of £10 million and the documentation in the case vast. The Crown sought to introduce the Headland material as bad character/ similar fact.This case was prepared for trial however one week before the trial the defendant became ill and began to receive psychiatric treatment. His fundamental change in instructions resulted in the defence team having to withdraw through professional embarrassment.

OPERATION 217  2009/2010 Defence. Leading Junior.
After extensive investigation proceedings were brought against 2 employees of Merseyside Police Authority and 5 directors/ employees of companies that performed work on behalf of the authority. The case involved multi million pound contracts over 5 years that the prosecution alleged had been obtained through corruption. The case lasted for 4 months.

OPERATION VALGUS Defence Led junior
In 2012 I was instructed for some 12 months to advise before charge one of the two main defendants. This was a substantial mortgage fraud involving Solicitors, Accountants, Surveyors and Financial Advisors that involved a substantial number of properties and in excess of £10 million. The trial lasted 5 months. The POCA was ultimately resolved in 2016.

OPERATION KYRENIA 2014 Junior unled – NHS fraud by Perfusionists.
Multi million pound fraud by a group of perfusionists over several years. Case involved 30k pages of exhibits and statements. 6 defendants. After a 4 month trial defendant was one of 2 to be acquitted. I have also defended in a number of money laundering cases both in Liverpool and Northampton.

MOSSMAN 2016 (CAERNARFON CROWN COURT.) Defence unled.
Money Laundering and Gangmaster in a cockle picking case. This case involved over £200k passing through a nominated account and the purchase of a Bentley by a bankrupt cockle fisherman in North Wales. Forensic accountants for both sides provided reports into the business activities of the defendant and other defendants. Ultimately the case was negotiated to ensure that the defendant did not receive an immediate custodial sentence and that POCA did not result in an in depth enquiry into his assets!

DRUGS
I have been involved in a large number of high value drug importation and distribution cases. In both Liverpool and Manchester. I have prosecuted on behalf of Customs and Excise a number of importations involving class A drugs involving values in excess of £500k
OPERATION PIRATE (LIVERPOOL CROWN COURT) Defence unled.
Large scale  high value amphetamine importation from Australia

MURDER
I have both prosecuted and defended in some 20 murders.

KEVIN FELL (LIVERPOOL CROWN COURT) Defence
Junior Counsel. During a burglary the defendant and his co accused murdered the occupier of the premises in an unprovoked and sadistic beating.

WIGAN CHIP SHOP MURDER  (LIVERPOOL CROWN COURT) Prosecution
David Steer Q.C. led me in the prosecution of a group attack upon a chip shop owner in Wigan. The murder was caught on cctv and provoked considerable outrage in the area. Careful analysis of the cctv from different cameras enabled the prosecution to gain convictions. One month trial.

ALTCOURSE MURDER (LIVERPOOL CROWN COURT) Junior unled. Defence. One month + trial.
A retribution shooting planned from within HMP Altcourse and arranged via smuggled mobile phones. I defended a prisoner already serving life for murder, whom it was alleged supplied the sim card that had been used to make the arrangements.

BOWMAN (PRESTON CROWN COURT) Defence. 2 months.
Lord Carlile QC leading Counsel. The defendant was arrested after the exhumation of his wifes body some 22 years after her death. Post Mortem examination by the Crown revealed a fractured Hyoid bone with red blood cells at the site of the fracture. The case involved eminent experts in pathology toxicology and forensic examination.

ANTHONY WHITE (LIVERPOOL CROWN COURT) Led Junior. Defence
3 month trial in which the defendant was convicted of a contract killing of Jason Osu, a male whose family were known to the police for serious criminality.

SEXUAL OFFENCES
I have prosecuted and defended in a large number of serious sexual offences.

OPERATION CARE (LIVERPOOL CROWN COURT) Prosecution.
This was one of the first large scale childrens home prosecutions. I was junior counsel for one of the homes on Merseyside and prosecuted a number of cases both led and un-led both against junior and leading counsel. Disclosure, delay and abuse of process was a real issue in every case by reason of the loss of numerous documents.

MERKLE (MAIDSTONE CROWN COURT) Defence. Leading Junior counsel
Defendant alleged to have been involved in systematic sexual and physical abuse of a trainee Parachute Regiment Private. The case was some 5 years old and had been the subject of previous litigation that was discontinued. Newspaper and political intervention had occurred and a fresh prosecution brought. After a 3 week abuse of process argument the case was ordered to be stayed.

PEARCE (ISLEWORTH CROWN COURT) Defence. Leading Junior counsel.
Historic through to more recent allegations made by a number of complainants against a priest whom it was alleged had indecently assaulted pupils over a lengthy period. The case resulted in considerable publicity in London and was and is still, the subject of media interest. Following his plea and sentence the defendant was re arrested and tried for two further historic allegations and was acquitted.

GREG SMITH 2015 (MANCHESTER CROWN COURT) Junior unled.
1 month trial of a male alleged to have been involved in the rape and kidnap of a number of 16 year old females whom he met late at night. Ultimately convicted of two.
POLICE
I have represented a considerable number of police officers on behalf of the Police Federation and otherwise who have appeared both in the Crown Court or at Police Disciplinary Proceedings.

JUDE 2008 (PRESTON CROWN COURT) Defence. Junior counsel.
Defendant and 3 other officers charged with Section 18 and Attempting to Pervert the Course of Justice. 2 month trial in which the prosecution alleged the defendant Jude had not only deliberately broken a mans
arm but had then tried to cover it up. Acquitted.

KELSALL 2010 (MANCHESTER CROWN COURT) Defence. Unled
High Profile case involving cctv coverage of arrest of a soldier who had served in Afghanistan.  A Crown Court Judge was so disturbed that he referred the case for investigation as he believed that the cctv recording clearly showed the police officers assaulting the soldier. The case was featured on national television and newspapers particularly the Mirror. After a 4 week trial the defendant was acquitted.

WHITE 2010 (LIVERPOOL CROWN COURT) Defence. Unled. First on the indictment.
The officer was one of 5 charged with conspiracy to supply Cannabis. Officers would execute a search warrant at a cannabis factory, bag the flowering heads but then fail to deposit the bag for destruction. Covert surveillance and telephone records and analysis were used by the Crown. The defendant was the only one to be acquitted. Thereafter representation at the Police Disciplinary Proceedings.

SHERON (PRESTON CROWN COURT 2013) Defence unled.
Multi handed. Perverting the Course of Justice/ assault. Defendant and other officers alleged to have been part of a group of football hooligans who severely beat another supporter then covered up the assault. After 4 weeks and at the close of the prosecution case the defendant and others were acquitted upon a submission of no case. Considerable disclosure issues and hostile witnesses. First on the indictment.

PAUL FORD (LIVERPOOL CROWN COURT 2016) Defence unled.
Defendant charged with Causing Serious Injury by Dangerous Driving. Defendant, a diabetic, whom the Crown alleged had failed to check his Insulin levels before driving. The resultant 70 mph crash caused two civilians in separate cars to sustain severe, permanent, life changing injuries. Medical Experts on both sides. Disclosure and continuity issues. Ultimately after submissions at the close of the case and before speeches, the Judge accepted that the causal link had been broken between the failure to check his blood sugar levels and the resultant hypoglaecemic incident. This was found to be as a result of over prescription of insulin not attributed to the defendant. A plea to dangerous driving was accepted and an immediate custodial sentence was avoided.

PARKINSON (LIVERPOOL CROWN COURT 2016) Defence unled.
Defendant police officer charged with Misconduct by looking at Police intelligence for Cannabis farms and thereafter supplying addresses to a team who would then burgle the premises and supply the drugs to others. [The Modus Operandi was remarkably similar to that of WHITE above] Major operation involving considerable telephone and observation evidence and analysis of force computers. Initial trial before a High Court Judge resulted in his acquittal on one count and failure to agree on remaining counts. Following a re trial the defendant was convicted. Two 5 week trials.

VIOLENCE
I have both prosecuted and defended numerous cases of violence including serious organised crime and individual cases of extreme violence just short of death.

DPP-V-C House of Lords 1995. Richard Henriques Q.C. as he then was, now Mr Justice Henriques QC led me on behalf of the crown. The case involved doli in capax and ultimately resulted in it being abolished by the Crime and Disorder Act 1998.

R-v- Paul Fletcher and others CA 2012. Appeal against sentence. Police Officer involved in the supply of Class B and C drugs in the Wigan area. Now regularly relied upon in misconduct/ supply of drugs by police officers.

Trevor Parry Jones was formerly a solicitor and partner in private practice for ten years, with extensive advocacy experience

“Has a wide ranging practice covering the gamut of criminal law. He acts for both the prosecution and the defence, and is noted for his focus on serious sexual abuse cases.” (Chambers and Partners 2014) 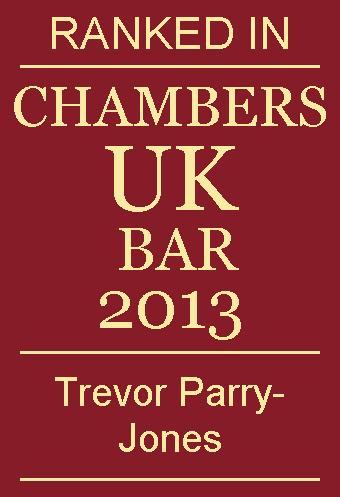 Graduated in 1979 with Honours in Law at The University College of Wales. Admitted as a solicitor in 1981 with distinctions in both Revenue law and Accounts.  I joined a firm of solicitors in Liverpool city centre becoming an equity partner before deciding in 1991 to concentrate on advocacy. I joined the Corn Exchange Chambers (ultimately to become 7, Harrington St Chambers), Liverpool in 1991 as pupil to David Steer Q.C. I was called to the Bar in February 1992 and have concentrated on Criminal Litigation thereafter.  I have been a grade 4 prosecutor for some 15 years and appear on the Attorney Generals list  as a grade B prosecutor. I have acquired an expertise that includes forensic analysis of medical, dna and blood spatter.  I have also regularly been called upon to analyse accountants reports, bank accounts and documents relating to fraud.